Most of the New Bitcoin Buyers Didn’t Panic Sell in 2021, Glassnode Finds

The morale among bitcoin hodlers remained high during the market correction. Most of those who acquired tokens this year were unwilling to let go of them, even if Bitcoin had its worst registered price drop..

A chart shared by blockchain analytics firm Glassnode revealed that most of those who bought bitcoin in 2021 have not sold them. If a strong hodl spirit in the middle of a volatile market seems odd, The SOPR (Spent Output Profit Ratio) metric could offer an explanation.

Glassnode calculates the SOPR by dividing the selling price by the paid price. The firm has a detailed article about the methodology used to obtain the SOPR and its implications. TL;DR, if the SOPR is above 1 then sellers are profiting. In a bear market, liquidations continue and the value falls below 1, where the losses outweigh the gains.

In February, even at its lowest point, the indicator never fell below 1, which is good news for those who believe the rally is not over.

60-Day SOPR (entity-adjusted) reset without falling below one.

This indicates a high HODLing conviction from new investors, as coins that were bought in 2021 did not move at a loss during this last dip.#Bitcoin pic.twitter.com/lvMctNDEmd

Glassnode’s indicator could be a new way to gauge sentiment in a market that today is commanded by large institutions and whales with bullish views over a long period of time.

These companies have bought Bitcoin as a store of value and a hedge against a possible crisis that could be brewing as a result of excessive money printing, a stagnation of the global economy due to the coronavirus, and loss of confidence in public policies.

For instance, MicroStrategy has recently converted more than $4 billion of its cash flow into Bitcoin. Besides, has taken advantage of these bearish corrections to buy more and more tokens.

Similarly, Tesla bought $1.5 billion in Bitcoin and changed its corporate policy to eventually accept Bitcoin and, in turn, be able to increase its Bitcoin holdings.

Both Michael Saylor -CEO of MicroStrategy- and Elon Musk -CEO of Tesla- have maintained that their strategy is precisely to hodl their tokens and not play on speculation.

A projection based on the stock-to-flow model also shows similar results, pointing to a possible continuation of the uptrend and an increasingly optimistic mood for the Bitcoin market. 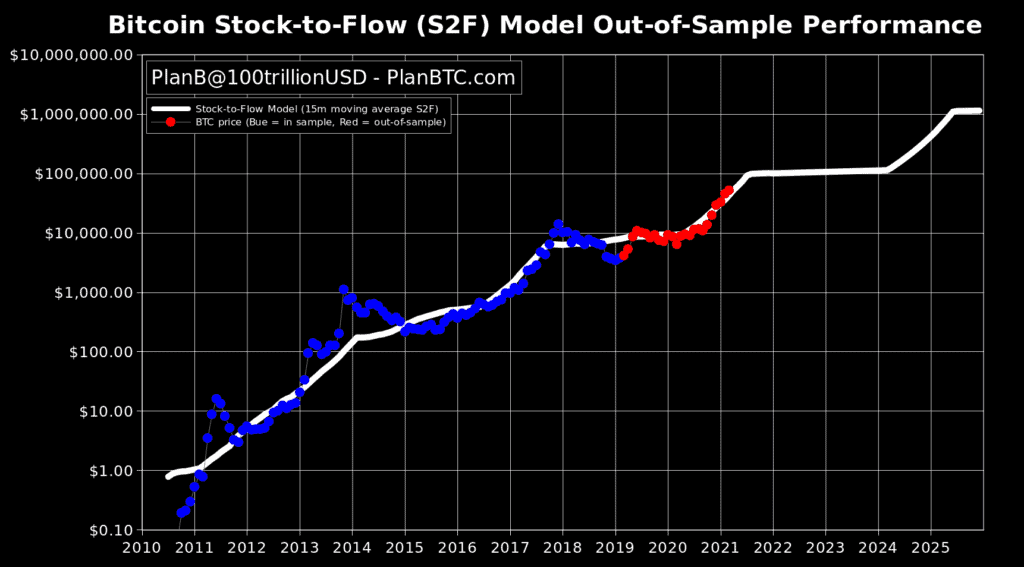 So if the arguments exposed by big whales don’t convice retailers to hodl their Bitcoin, maybe this graph could do the trick.