One or a group of large bitcoin buyers, also called bitcoin whales, appeared to be behind Wednesday’s price pop, based on data that showed large bitcoin purchases on exchanges during early U.S. trading hours.

But why the whale – or whales – placed bitcoin buying orders of nearly $1.6 billion in a few minutes on a centralized exchange remains unclear.

According to South Korea-based blockchain data firm CryptoQuant, someone or a group of people purchased the massive amount of bitcoin on the spot market on centralized exchanges between 13:11 and 13:16 UTC Wednesday.

The timing of the purchase came not long after U.S. Republicans shared favorable comments on cryptocurrencies and amid increased expectations from markets that the U.S. could soon approve a futures-based bitcoin exchange fund.

The purchase could have started on Coinbase, Ki Young Ju, co-founder and CEO of CryptoQuant told CoinDesk. He pointed out that “Coinbase premium” rose sharply around the same time before it dropped again. 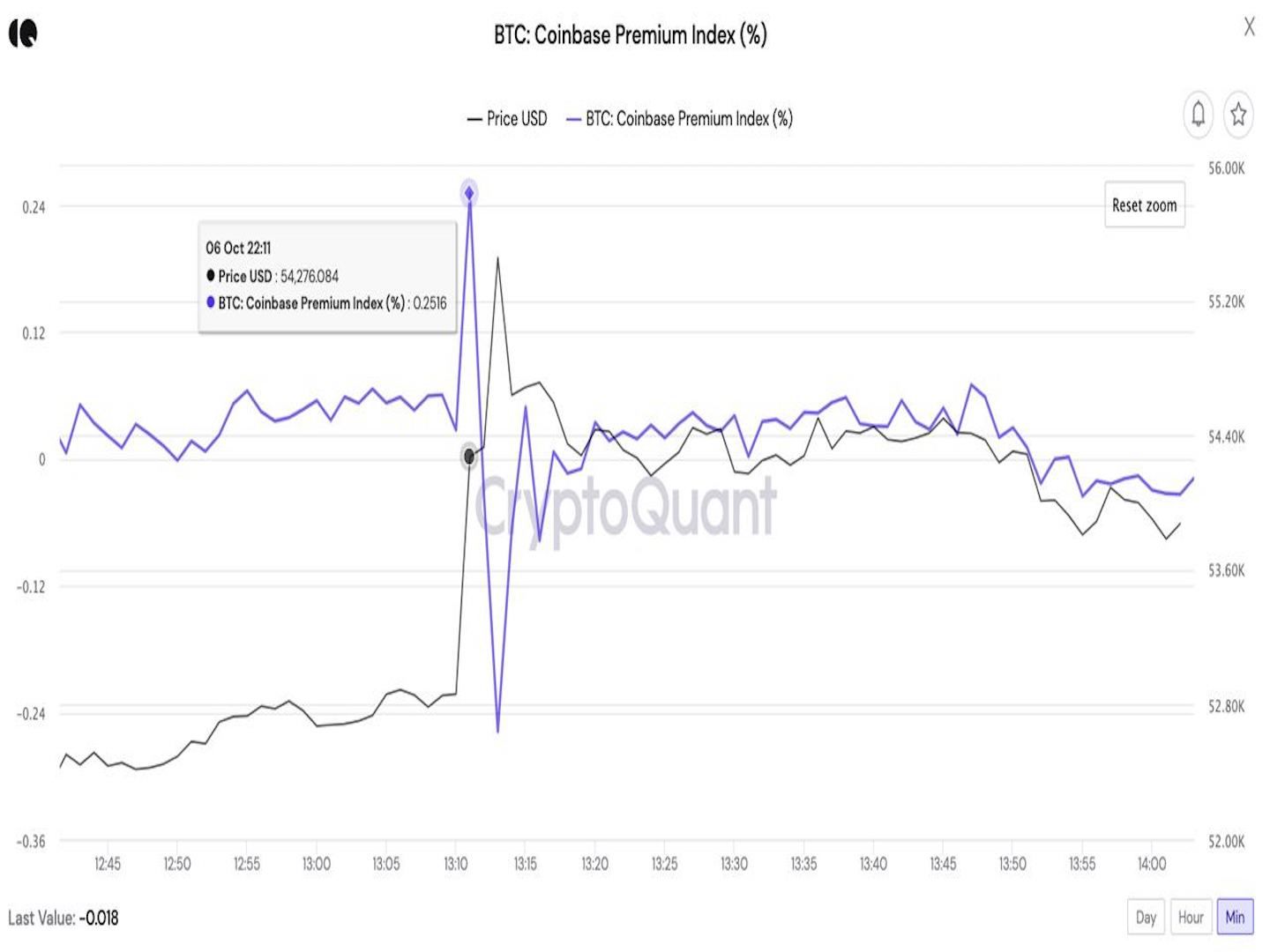 The “Coinbase premium” is an indicator showing the gap between Coinbase’s BTC/U.S. dollar (USD) pair and Binance’s BTC/USDT pair involving the tether stablecoin. When the number increases, it usually reflects stronger buying power on Coinbase, the centralized exchange.

But Willy Woo, an independent blockchain data analyst, disagreed with this narrative. He told CoinDesk that the purchase mostly came from Binance, citing data from another blockchain data firm Glassnode.

According to Glassnode, the hourly charts of net transfer volume for bitcoin from and to Coinbase, or the difference in volume flowing into and out of Coinbase, has been more neutral compared with its competitor Binance, on a 48-hour moving average. 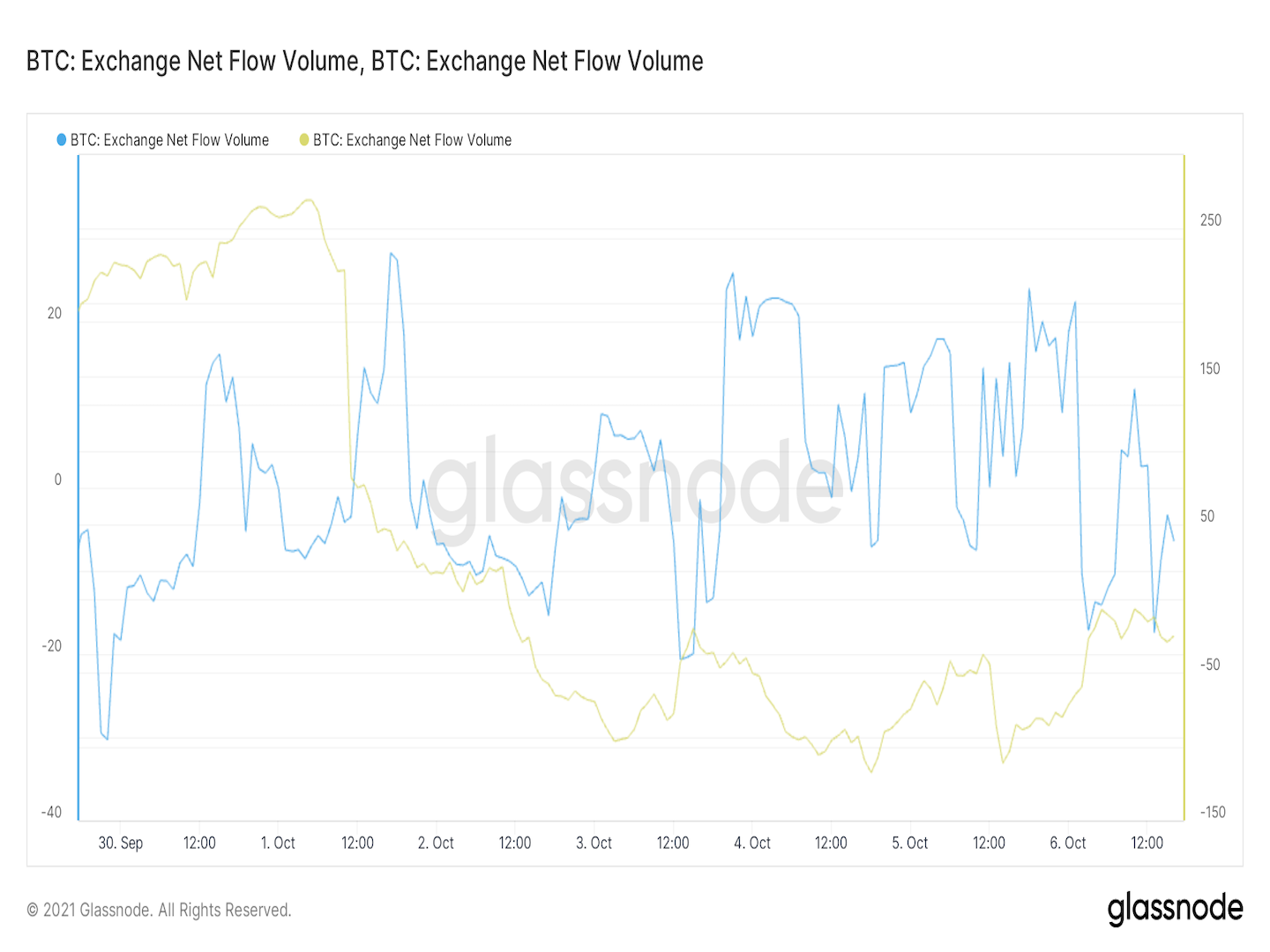 On Binance, the difference in bitcoin volume flowing into and out of the exchange has been negative since the past weekend.

I “haven’t seen any netflows coming out of [Coinbase] [and] also the buying on there is not that out of the ordinary compared to other exchanges,” Woo said. “The buying actually looked stronger on Binance…Coinbase was net selling more than buying.”

Regardless of which exchange was responsible for the large order that seemed to spur bitcoin’s spike, the bigger question is why the purchase took place on an exchange.

Large bitcoin orders are usually placed through the over-the-counter (OTC) market. In that way, the transactions won’t move prices the way they would have if the trades were occurring on the spot market via exchanges.

A large purchase on the spot market that potentially has moved the market up dramatically seems suspicious to CryptoQuant’s Ju, who suggested that whales were trying to stimulate interest among other investors by creating a price increase. These investors would then become fearful of missing out on the surge. “Sometimes, you have to manipulate the price to make FOMO (fear of missing out),” Ju said.

But Outumuro said that large buys via OTC desks can be too slow for some traders because of the current bullish sentiment on the market.

“Given that bitcoin broke out of a multi-month trendline and above a local high, I’d argue there’s a high amount of momentum trading taking place in spot markets – with high volume and conviction,” he said.

Indeed, the market’s attention is now back to bitcoin in full bullish mode: As bitcoin broke above $54,000 on Wednesday, institutional interest in bitcoin has risen significantly too.

One-month bitcoin futures contracts based on the Chicago Mercantile Exchange (CME) are trading at an annualized premium as much as 17.73% to the spot price, according to derivatives research firm Skew.

“It’s rare to see BTC in the top 5% of crypto asset performers in any given 24 hours,” digital asset prime broker Genesis wrote in its newsletter on Wednesday. “Given that BTC is for many large institutions the ‘onramp,’… this further supports the conclusion that this runup is institution-driven.” (Genesis is owned by Digital Currency Group, which also owns CoinDesk.)